Secrets in your sewer. 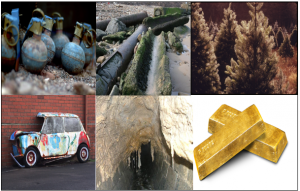 Between April 2017 to March 2018, companies invested £111 million to maintain our public sewer network and prevent blockages and flooding.

Despite this great investment, earlier in the week a new fatberg was discovered recorded to be 64 metres in length; the length of 6 double-decker buses. This is roughly a quarter of the length of the London fatberg.

We thought we would take this opportunity to look at other unusual items that have been found to cause issues in the sewers.

The UK is not the only place where such oddities are being found. In Nagano, Japan, a total of £36,000 in gold shavings was found by sewer workers doing a routine maintenance check. In Edmonton, Canada, dinosaur bones were found (belonging to a creature called an Albertosaurus).

nuron’s patented sewer nervous system measures flow, depth, temperature and structural integrity in real-time enabling water companies to proactively manage their networks and giving them the visibility in their network that is so desperately needed.